On Saturday, August the news of the demise of Journalist Corazon Wafula was announced.She was Radio Africa's Group journalist and was attached to Star News, Mpasho and Radio Jambo.

The late died after a short illness and this was confirmed by her colleagues who were on Friday organizing a fundraising to help her cover medical bills only to receive news of her death hours later.She was admitted at the Machakos Hospital. 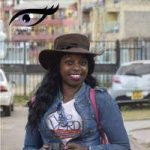 Wafula who was covering political news and court developments was very hard-working. Although she had an illustrious media career, it is her uniqueness in her field that won her accolades in the fraternity as a top Journalist whose Intellect, humour, wit and humility became her unmistakable identity.
The family, friends and colleagues of the late Corazon are mourning the death of this talented Journalist who keenly focused on her work in order to provide news to kenyans at large on time.
May she rest in eternal peace and may God help her family to be strong in these tough times.